Nashville Tour - That Band at The Place
After the loss of the Predators at the hand of the Red Wings, we decided to stroll a couple of blocks down the way and re-visit The Place. We went there Tuesday to see the great Blues band CJ Vaughan and the Highway 58s. Tonight, we were able to see The Place's House Band, "That Band." They were a wonderful funk/soul group that got everyone there up and dancing. Their lead singer had a beautiful voice, their drummer, a quirky sense of humor, and their sax and trumpet players played almost as well as my cousin used to play. I would post more information, a website and such, for "That Band," but I cannot find anything. No big deal. If you are in the Nashville area, they will be playing every Thursday through Saturday for the next few weeks.
Tomorrow morning we have a few more sessions, then it is back home. I have had a blast in Nashville and need to come back sometime. Not only have I enjoyed the music scene, I learned a great deal at the conference and met a whole bunch of new people. 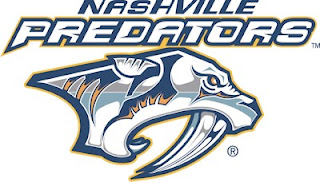 Huge group of us checked out the Predators - Red Wings game this evening. Although the Predators were not victorious, we had a great time. There is nothing like a pre-playoff hockey game between the top 2 teams in the league...like I know what I am talking about. I have been to a total of 2 NHL games in my life. Ironically, the other game...wait for it....Red Wings in Detroit.
Next stop - The Place to see That Band....more later.

Nashville Tour - CJ Vaughn and Highway 58
This week I am in Nashville for a conference for work. A few co-workers and I got into town Tuesday afternoon so we would not have to fly in early Wednesday for the conference. We were able to gather together and have dinner. We went to the famous WildHorse Saloon and I actually had a dinner first...I ate dinner while listening to a live band. Besides that, the steak I had was pretty good too.
I am not sure what we will be doing the next few evenings, but last night we traveled up and down Broadway to find a good blues band, and boy did we find one.
We stumbled upon a venue called The Place on South Second. When we walked by, there was a guy standing on the porch. We asked him if there was live music tonight and he told us that this band, CJ Vaughn and Highway 58, were playing. He said the lead guitarist/vocalist was an 18 year old kid that played the blues like no one else around. We figured, great, let's check it out and got a show that we would never forget.
Take some time to check out their myspace page and listen to their music, read about their influences, and see what they are all about. I found it interesting that some of their influences, and there are a great deal of them, were Rich Mullins and DC Talk along with Bach and the Eagles.

Any Words of Wisdom (living out the blog title)
A few weeks ago, our daughter got the cutest, ugly dog that you have ever seen, and promptly named him Alex. 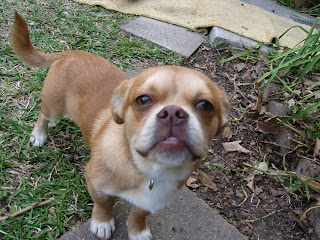 Alex is friendly, playful, good with children, but there is one problem...house broken he is not. We have tried regular walks outside, going "potty" 30 minutes after meals, having him in a small pen in the kitchen during the day (which Houdini somehow gets out of), but have had no luck.

Words of advice from you guys would be great!

Here We Go Again
It seems like every few months, for some odd reason, there is a debate on various Methoblogs regarding the Virgin Birth and Christ's Resurrection. The current debate that prompted this post is here. And for your viewing pleasure, here are a few more links from past debates (thanks John for hosting these discussions):


Don't get me wrong, I am all for a lively debate about my faith. I just cannot seem to fathom any Christian saying, "I am a Christian, but the whole Virgin Birth thing and the Resurrection, that may be some literary license." Uh, what? Anyway, I just wanted you guys to see some of the stuff that tends to be debated now and then (every few months).
...
.....
.......
Oh, and a couple more things, I figured that the first Seven Ecumenical Councils had done enough "beating of a dead horse" that we would not have to discuss it again. I also thought that the Methodist Confession of Faith and the Articles of Religion laid it out pretty succinctly too. I guess, for some, that may not be the case.

I love my Methodist faith, but sometimes the freedom of expression and ideas that allow us to reach so many around the world for Christ, drag us down into debates about basic tenets of the Christian faith that have pretty much been resolved.

All in all, I'm just askin', "Why are we debating these things again?"

Blog Update
As some of you may have noticed, my blog looks a little different. I had Susie at Blue Bird Blogs give me a sprucing up. After the many phases of blue, red, and the infamous black and orange, I decided to go with something a little more user friendly. I still need to tweak my links, but all-in-all it is done. I hope you enjoy it!

More Deep Thoughts by Oswald Chambers
Keeping with the Lenten theme, "My Utmost for His Highest" had a reflection yesterday entitled "The Relinquished Life." One thing that we are called to do during Lent is to relinquish all we hold dear, to relinquish our SIN, in a desire to be closer to and fulfill the Lord's calling. God wants us to hate sin as much as He hates sin; and during Lent we strive to relinquish all those things that we know are bad for us, that limit our relationship with God. Chambers addresses that struggle in the following way:

"There is always a sharp painful disillusionment to go through before we do relinquish. When a man really sees himself as the Lord sees him, it is not the abominable sins of the flesh that shock him, but the awful nature of the pride of his own heart against Jesus Christ. When he sees himself in the light of the Lord, the shame and the horror and the desperate conviction come home.

If you are up against the question of relinquishing, go through the crisis, relinquish all, and God will make you fit for all that He requires of you.

As we do our weekly Lenten checks, we ask ourselves if we are relinquishing our life to Him, or holding on to those things that would keep us from TRULY being close to God because we are afraid of what we will see. Relinquishment is painful, but anything worth having usually is.

Deep Thoughts by Oswald Chambers
I have been doing my best to read through Oswald Chambers "My Utmost for His Glory" this year as an addendum to any daily prayer or devotion that I may be doing. This quote is from the reflection dated February 28th.

The title of the reflection was "Do ye Now Believe?" Easy question, harder to answer...just ask Peter. Well, do ye now believe?

Kickin' It Old School
I am not exactly sure why, but I have reverted to my CD collection from high school. In particular, I have been listening to Tourniquet a great deal. Tourniquet is Christian heavy metal. I know that sounds contradictory, but they really are.

I have always noticed, that in times of angst in my life. In times that my soul really hurt and longed for peace, I for some reason, turned to heavy metal music as a release. In college, when some girl broke my heart, a buddy of mine and I would get together at his house, bar-b-que, and listen to KMFDM as loud as we could. (this is a time when I really wasn't living my faith as fully as I could)

Tourniquet sooths my soul because they bring me back down to earth and help me examine what is really important in my life. What God called me to in scripture. The blessings I have if I would ALWAYS strive to follow. Believe it or not, it helps me get closer to God.

The following 2 clips speak to me right now. A great deal of people don't like the whole fire and brimstone reality of hell, but I find it speaks to me in a ways, at times, when the soothing, comforting knowledge that Christ dies to set us free does not. I am not sure why. I think, sometimes, that we all need this little kick in the pants.

You Get What You Pray For

Here is a taste of the lyrics (Click the Song Title for Link to complete Lyrics):
The Threshing Floor
There's only two roads
And none in between them
If you don't choose the Son
The choice you've made is against Him

Your life is in danger!

I am JD
From Texas

Practice of Presence of God
by Brother Lawrence