This post is a little different. I wanted to review the current album of a local Christian Band that has begun to make it big in the Christian Music world.

I had only heard one of their songs and it is was by happenstance at that. KSBJ, the local Christian radio station here in Houston, was having their brown bag music session and Leeland was the musical guest. The event was rained out, but Leeland still did couple of songs that were later available on KSBJ's website. I figured, what the hey, I would take a listen. Needless to say, I was very pleasantly surprised.

With the harmonies reminiscent of Jellyfish and the vocal prowess of Remy Zero's Cinjun Tate, Leeland powerfully proclaims the glory of Jesus Christ and the wonderful gift of salvation. With lyrics like:

Leeland drives home the point that focus on Jesus Christ allows healing and redemption and calls the soul to praise the Lord in all that we do.
Leeland is the first alternative Christian band (recently nominated for a BEST POP/CONTEMPORARY GOSPEL ALBUM CATEGORY FOR SOUND OF MELODIES Grammy) that I have listened to in a long time. I listen mostly to Contemporary Christian music, mellowing a little in my old age, but Leeland has touched a note in my heart and encourages me to sing along to every song on their album. I told my wife that the one thing that I really want for my birthday is tickets to the next Leeland concert here in Houston. Not a big request, but it will be an enormous experience.
Check out some clips of their music at their website. If you like the comforting melodies and powerful vocals that drove a great deal of alternative music in the 1990's, and deeply spiritual and encouraging lyrics, you will probably like Leeland.

The 12 Days of Christmas
This is one of my favorite Christmas time songs. I remember first listening to this song on a record at my cousin's house when I was about 10 years old. I have loved it ever since.

The 12 Days of Christmas
by Bob & Doug McKenzie

Thanks to Michael L. Fiegel for having this on his site.

Out of Touch
I have not posted in a while, and I am sorry, but we have been busy here lately at the household. I am working on a big post, which seems to be turning into a mini-novel. We are getting things ready for my daughter's birthday party Sunday afternoon and I finishing up some paneling in the dining room. See picture below for those that think I am not mechanically inclined...YOU know who you are :) 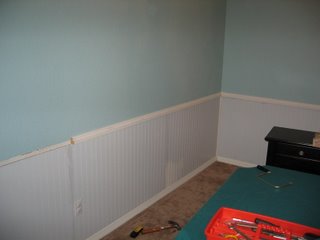 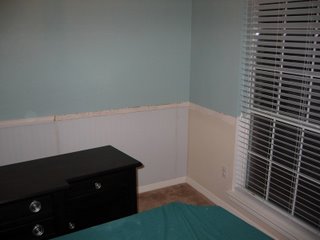 I look forward to getting back to posting more regularly in the next few weeks cause I actually have a few things to say.

Last night, my beautiful wife thought it would be funny to have our daughter do a few tumbling routines. Mind you, she turns 3 on Monday, so this will be a little funny, and I know it is extremely cute. Enjoy!

Solstice Barn
I make it a point not to discuss politics on my blog, mainly because I believe the best way for me to evangelize is to speak to the gospel and not debate politics. My faith has a direct affect of my politics, but I do not believe that politics should EVER influence my faith. With that understanding, I still felt I needed to post this, not so much that it makes you think about things, but because it is darn funny. Below are pictures, links to a video news article, and a news article.

In tongue-in-cheek deference to the American Civil Liberties Union, students at the University of Texas displayed an "ACLU Solstice Barn" on campus, featuring politically correct figures.

"We've got Gary and Joseph instead of Mary and Joseph in order to symbolize ACLU support for homosexual marriage, and of course there isn't a Jesus in the manger," said Tony McDonald, chairman of the Young Conservatives of Texas branch on the Austin campus.

The group, whose plans WND had reported earlier, installed the "creche" on the West Mall of the campus for display yesterday and today.

McDonald told WND today the reaction by students to the display was overwhelmingly positive.

"Even some liberals got the humor in it and conceded certain positions the ACLU takes are out of touch with the mainstream of Americans," he said.

One visitor turned out to be the ACLU's top official in Texas, who, according to McDonald, "had to admit that it was humorous."

McDonald said quite a number of students aren't even aware of the ACLU, and members of his group that manned the display throughout the day had to explain the acronym.

The three Wise Men in the display were Lenin, Marx and Stalin, McDonald told WND, because ACLU founder Roger Baldwin, while director of the organization, was a backer of Soviet-style communism.

As director of the ACLU in 1934, Baldwin wrote an article entitled "Freedom in the U.S.A. and the U.S.S.R." in which he said "the Soviet Union has already created liberties far greater than exist elsewhere in the world." He later moderated his views but maintained a commitment to socialism.

The scene also featured a "terrorist shepherd" and an angel with Democratic Rep. Nancy Pelosi's face, using a photograph of the soon-to-be speaker of the House from San Francisco.

"The ACLU and other left-wing extremist groups are working diligently to destroy Americans' rights to the free expression of religion," said the Young Conservatives' Executive Director Joseph Wyly.

Wyly pointed to the city of Chicago's decision this week to ban advertisements for "The Nativity Story" movie from a local Christmas festival, fearing they might offend non-Christians.

"It's just more evidence that there is a war on Christmas being waged by the far-left in this country," he said.

I am JD
From Texas

Practice of Presence of God
by Brother Lawrence